My friend Mary Manahan will be exhibiting a retrospective of her work at the Queenstowns Art Gallery in Hopewell, NJ. Be sure to stop by and visit if you are in the area, it will be fabulous! 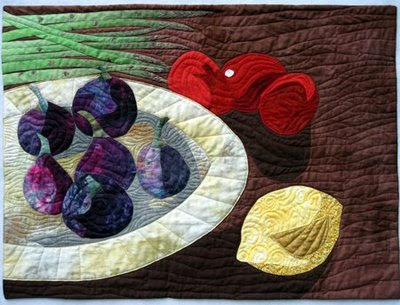 The Quilt Show - These quilts done by Mary Manahan are not your grandmothers patchwork quilts of yesteryear, instead they are all very vibrant in color, texture and design. The artist makes use of many different kinds of fabrics from standard cotton to silks. She dies and paints some of the fabrics in order to get the colors and styles that she wants for the images that she is designing and each one is done with both sewing by had as well as some machine work. From a distance you might think that you are looking at a paining while viewing Mary’s quilts.
Posted by Marlene at 1:07 PM 1 comment:

Please leave a comment, even if you are anonymous.

So here’s the background:

We belong to an informal sailing club with interests in promoting both racing and cruising. The club is based at a state park, there is no club house or building to gather its members, and “pop-up” tents are often used at specific events. It is an all volunteer organization, with elected officers, each with his/hers own responsibilities.

At a recent club event, which as it turned out, was the biggest in club history, we could tell by the number of members who signed up. It was decided to contact to the local newspapers to let them know. They came with a reported and photographer. This was great promotion for the club.

As with many events involving food, a deadline was set for people to sign up by to insure the appropriate amount of food to order from the caterer. As usual, there were many who sign up after the deadline, resulting in having to change the food order a few times.

There were also 2 big party tents that had to be washed and set up ahead of time for the event dinner to be held under. There was a race committee and awards were purchased for the event.

After dinner, now this is a very informal picnic, the club Commodore stood on a picnic table to hail the crowds attention: he 1) introduced himself, 2) mentioned it was the biggest event in club history, that the newspaper was there with a photographer, 3) thanked the officer responsible for arranging the event dinner and a round of applause was given, (no one else was thanked) 4) passed the “floor” over to the officer presenting the awards.

What is wrong with this picture???

Later that evening, the officer in charge of the dinner resigned their position, stating it was improper of the Commodore to introduce himself before thanking them for the job they did, stating it was not proper etiquette, they felt his thank you was “an after-thought” and felt that their efforts are not appreciated enough.

Now granted, this is an all volunteer club, but how high on a pedestal should ones efforts be place?
Posted by Marlene at 11:51 AM 5 comments:

In my attempt to improve my free motion skills, I realized my sewing table needed to either be changed, as buy a new one, or adjust an existing one. So here's the project... below is an old photo of the wood top table my embroidery machine sat on. My Bernina is on a folding office table. 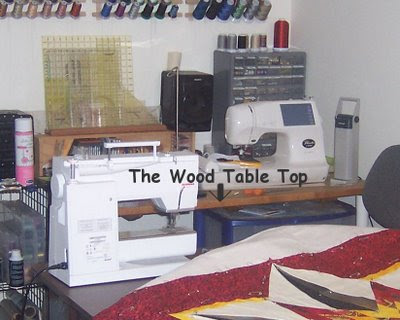 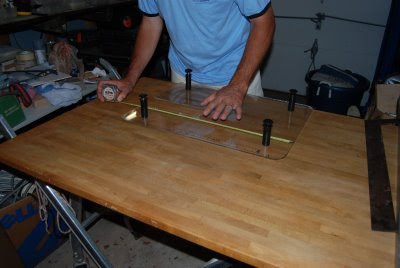 With a jigsaw, Dan cut the table, following the curved corners of the from the template. 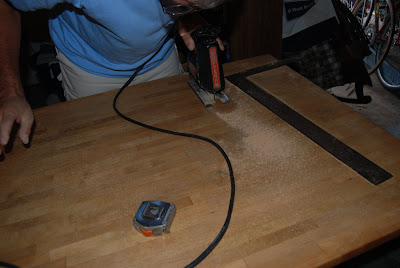 The photo below is what the underside of the table looks like. Using 3-inch L brackets, the cut out section was lowered to the height of the sewing surface on the machine. 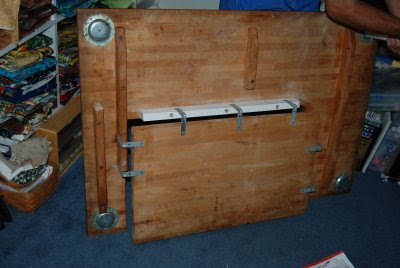 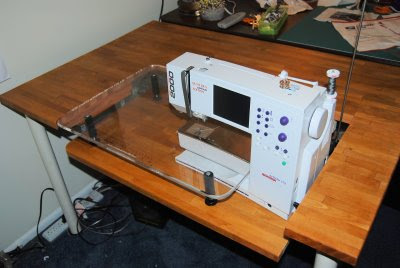 On the Marty watch... 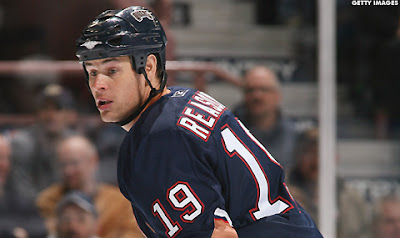 Marty Reasoner is now an Atlanta Thrasher. Marty has been in the NHL over 9 years and has played for St. Louis, Edmonton , and Boston.
(Photo captured from the Thrashers web site and is here without permission from it's owner. If the owner would like it removed I will gladly do so.)
Posted by Marlene at 3:19 PM No comments:

Sunday, July 13...here we are showing our body marks. They wrote our number on both arms, both hands and our ages on our right calf with an R on the left , for Relay, with a permanent black marker. 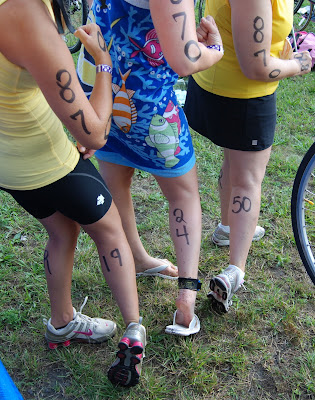 Here we are before the race start. Each wearing our "own hat", Danielle was doing the bike leg, Beth the swim, and I am running. 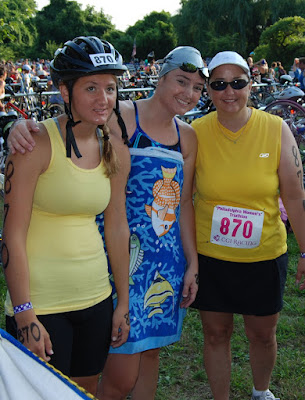 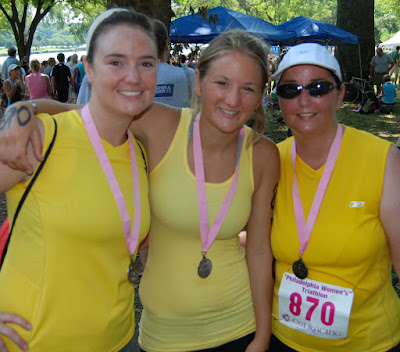 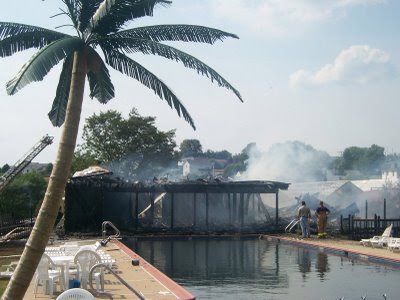 Yesterday afternoon, we heard an explosion and saw plumes of black smoke at our house which turned out to be an exploding propane tank that heated the adult pool of the swim club we used to belong to, the previous 18 years. Danielle is a lifeguard there, thankfully she had the day off. No was injured in the 2 alarm fire.

The building on the right, behind the 4 lane adult pool, is the one that burned.

This past weekend was the Thistle Great Lakes Championship held at the Seneca Yacht Club in Geneva, NY. Dan sailed with Ben and Beth in this regatta. This is not our boat, just a random photo I took of the boats sailing downwind. 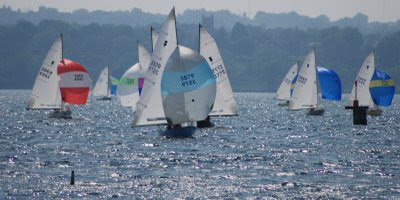 The photo below is a mark rounding, there were 63 boats at this regatta.

There has been longstanding shenanigans at regattas between Dan and his friend Bill that has been going on for well over 25 years. With stunts such as putting a boat in the swimming pool overnight, tossing a few spare items of hardware in the bottom of the boat to make you worry if something broke, moving port-a-johns, plastic wrapping a boat, the list goes on and it is truly just for fun. Well we did not camp at the regatta, so to protect the boat, Dan pad locked the cover to the boat trailer as well as strung a bike lock through the wheels so the boat trailer could not be moved. As the news spread of what he did, one thing we did not count on, was Bill put a lock on top of our locks. It was truly very funny. 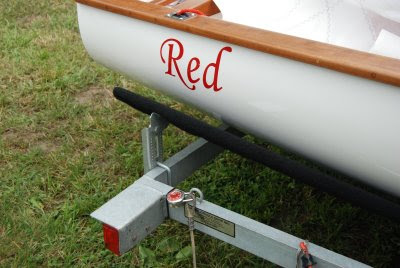 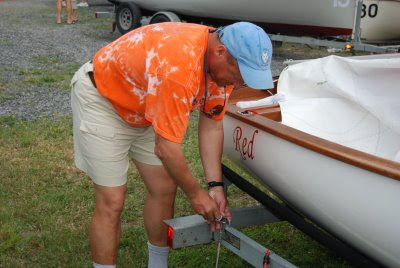 On Sunday Carol Soderlund invited me and my friend Delia to her house and we had a personal quilt show of her many masterpieces as well as a house and studio tour. Carol's husband sails Thistles too. Carol does not race, but told us the boat is really hers because it was picked it up on a Mothers Day. 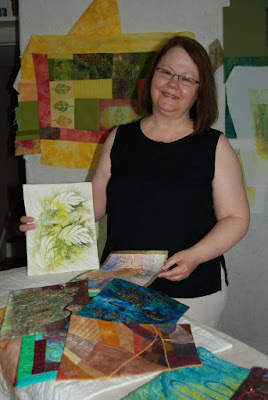 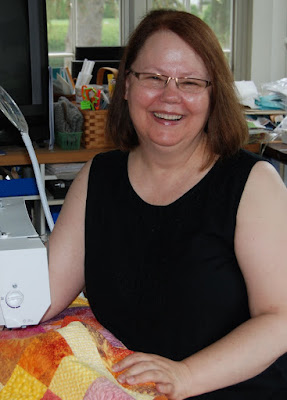 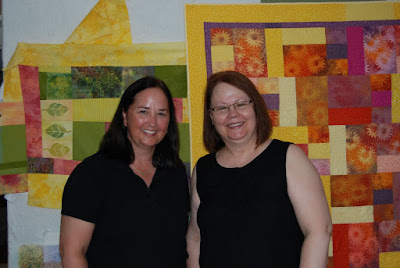 After the racing was over my brother and his wife who live in Rochester, drove to Geneva to have lunch and visit with us at the club. 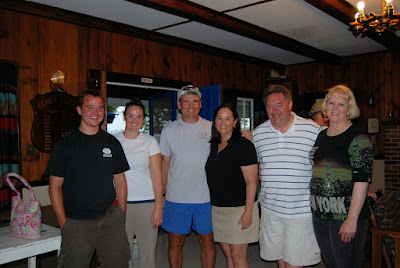